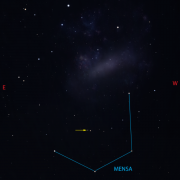 We are often asked at the observatory to find stars “purchased”  by members of the public in memory of a departed loved one. Over the years we have helped many families find their stars. Our volunteers always make the evenings memorable and the evenings never fail to be poignant but they could be so much more meaningful.

I won’t dwell on the purchase itself itself except to say two things. Firstly, anybody can set up a company to “sell” a star name but really all you are buying is the right to put yourself in a private company’s database somewhere. For what it is worth a star’s official names are given to it by the International Astronomical Union and they don’t sell the naming rights.

Secondly, the stars that do make their way into these catalogues for purchase are inevitably very faint and invisible to the naked eye. Sometimes the coordinates associated with the stars are out of date or inaccurate to the point where it is hard to identify which star it actually is.

I want to propose an alternative that would provide grieving families with a connection to the night sky that they can renew every time they walk outside at night.In short, connect the event with the whole sky. Rather than trying to find an invisible star, look at what is easily visible (the brightest stars and the constellations). By doing that we will be carrying on a tradition thousands of years old, and bringing the night sky back in to the lives of the people remembering.

With planetarium programs we can recreate the night sky at any location on earth at any given time. You can find which bright stars were prominent in the sky, which constellations were highest and which planets were visible. That combination won’t recur every year thanks to the wanderings of the planets but each facet of the night sky provides some connection that you can make quietly on your own. You will have added your family’s story to the many human stories that mark their chapters in the sky. The stars and planets don’t predict your story, but they can help it to be retold and remembered.

Want to join the discussion?
Feel free to contribute!