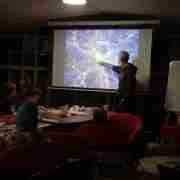 The seasons are changing here on Earth as we approach the September Equinox, but have you ever considered that other planets might have seasons? Or not? And which ones? Did you know seasons on Uranus last 21 years? These were all thing that the Novae group explored at the September session. The older Supernovae group looked at the range of skills or types of learning that can lead to a career in astronomy, such as computing, chemistry, biology, engineering, mathematics as well as the obvious one of physics. Unfortunately the cloud was a bit too much to allow any viewing, despite it being a nice first quarter Moon overhead.